Procurement success in 2023 with our Strategy Course

Or receive our famous weekly newsletter

Record of Proposals – Keeping Track of All Negotiation Data

The Record of proposals is a necessary tool when you’re dealing with many variables and you need to maintain a record of progress throughout the total negotiation.

After reading this article, you should be a master of using and creating your own record of proposals!

This is a necessary tool when you’re dealing with many variables and you need to maintain a record of progress. Most negotiators are often found scribbling notes in no particular order while the deal unfolds before them. When the deal is done, you can’t make sense of your notes or what the other party has suggested, let alone the last full position that was offered.

The record of proposals is a very important tool to use, especially if you’re about to close deals. With the help of this tool, you’ll be able to track down any important data needed to close down a deal.

Or receive our famous weekly newsletter

Naturally, we at Procurement Tactics created small records of proposals samples so that you can first-hand see what it looks like. People tend to rush all over and then forget things during the course of negotiations.

Most negotiators are often found scribbling notes in no particular order while the deal unfolds before them. When the deal is done, you can’t make sense of your notes or what the other party has suggested, let alone the last full position that was offered. 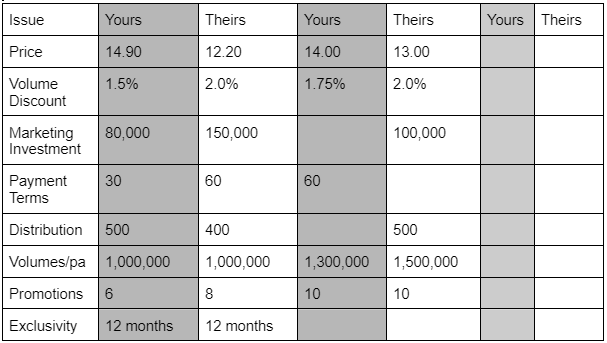 While moving across the page tracking of your position with theirs, it allows you to summarize accurately and to make sure that your facts are clear when you come to write up the agreement.

Over time, the record of proposals will allow you to

If you don’t confirm what you’ve agreed to, how do you know what decisions were made and agreed on? In most cases, this can lead to another negotiation later on.

At this point, you are now ready to negotiate. The planning is done, you’ve mastered the tactics, your behavior is tuned to that of a professional negotiator. You are now able to foresee what is inside the heads of your opponents, allowing you to deal with opportunities as the other party sees them.

This Negotiation Course For Procurement Professionals is only as complete as planning, and never so complete that everything else can be taken for granted. Never be assuming and always be inquiring. Don’t be rushed, but be considerate and respectful.

We know it’s a tough balance that requires nerves of steel and lots of confidence to boot, and it is for this reason that you can never afford to be complacent.

An Example of Closing a Deal

I want to share a personal example of something I did in the final phase of an annual negotiation.

When I came to a final agreement, I directly produced the first draft agreement via e-mail. Not the hour after closing the deal, but directly after coming to an agreement, with all negotiators in the room. By doing this, I saved myself hours of discussion after closing the deal. Especially when dealing with large,100 million dollar+ suppliers, it often took me months to come from a face-to-face deal towards a signed contract.

After closing the deal, we went on towards the next step: negotiating about what we agreed upon. This was a waste of time that led to many negative feelings on both sides of the negotiation parties.

Save yourself time & effort in moments you have the opportunity to wrap up the made deal directly when all negotiating people are still in the same room. I did this by sharing my screen on a monitor while writing my wrap-up e-mail. I send that e-mail to the supplier, which directly after sending it, confirmed it with a reply on my e-mail.

In this lesson, you have learned how to create and implement the move planner and how to track proposals during your upcoming negotiation.

+ What is a Record of Proposals?

A Record of Proposals is a simple tool a negotiator can use to keep track of all data presented during negotiations.

+ Why is a Record of Proposals important?

Negotiators tend to scribble anything and everything on their notes while negotiating. This record helps identify important data.

+ Is the Record of Proposals only for negotiators?

Anyone can use the record of proposals, but this template is specifically built for negotiators, as it helps them keep track of all important data that was discussed during negotiations.

You'll get a certificate after completing the course